To be honest, if I could fly Business Class every time I would but this trip I tried Premium Economy on the A330 with Cathay Pacific.

It is a long journey: Brisbane to Cairns then Hong Kong and finally Paris so I was delighted to get a bulkhead seat, Row 30 for the first half of the trip to Hong Kong and then Row 33 for the second half. Here are my recollections of travelling Premium Economy with Cathay Pacific.

Leg Room. – This is the great attraction of Premium Economy. I am a tall woman with very long legs and the leg space is so good that even stretching out I could only just touch the bulkhead in front of me. Even in the other rows, you don’t knock your knees against the seat in front of you. The only discomfort is the leg rest in the bulkhead seat that extends with a metal bar at the base that is uncomfortable to rest your calves on. 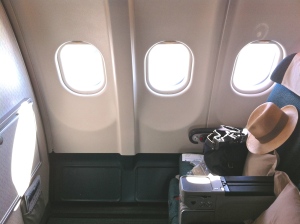 Comfort and Recline: The seat is wide enough that you don’t find yourself with your nose in someone’s armpit when you fall asleep. I could even turn on my side, tuck my legs under me and doze. Cathay Pacific states the recline is 8 inches/20 cm which is bearable. The flexible headrest can be bent inwards slightly to nestle a pillow against it.

There is a small tray (to be shared) on the armrest between the seats and a smaller one that slides out from the armrest to stand that welcoming glass of champagne. There is also a charging outlet for electronic equipment.

Cathay Pacific offers a moist hand towel on boarding and I generally hold onto it for use during the flight. Between Brisbane and Cairns I felt the flight was treated as a Domestic route. We were offered orange juice in plastic cups, a cold Sarah Lee Apple Muffin that was sticky, crumbly and so big it was difficult to bite into. No napkin was offered so I was pleased I had retained the hand towel.

At least I had a window seat and looking down at the Brisbane River it looked like a long sinuous carpet snake with the wakes from small boats creating patterns that shone like scales. Although Rudyard Kipling never visited Brisbane the Kolokolo Bird from the Just So Stories could have been describing the Brisbane river with the description “The great grey-green, greasy Limpopo River…”

If you love colour then you should not miss flying over the reef on a sunny day. The ocean was a mosaic of glowing iridescent sea green with swirls of aquamarine and deep blue around the inner reefs and islands making them look like large predatory jellyfish. My imagination went overboard and I could see their mesmerizing green tentacles reaching out to snare the ships as they sailed through the uncharted reefs.

Cairns – I could have done without the 70 minute stop-over which lengthens the journey but was delighted to meet a couple of friends who were also flying to Hong Kong so that passed the time pleasantly.

Rather than exit the plane via a pedestrian bridge we walked across the tarmac and I was intrigued to see that the parking apron is laid with concrete block pavers. I later found out that Hong Kong’s airport also used this paver as the preferred medium on land that may have subsidence issues. As a treat, I bought some lime & pepper Macadamias on which I later munched very happily in Rouen with memories of Queensland.

After Cairns it would seem the flight is now considered an international flight and the treatment is different.

We are offered champagne, orange juice, water both sparkling and flat all in glasses and a small packet of smoked almonds. This is much more to my taste.
I sip and munch happily and examine my toiletries bag which is a smart black and cream envelope. It comes with instructions on how to collect these and recycle them but I am more interested in the contents which are the usual mask, earplugs, loose socks, toothbrush and small tube of toothpaste which is almost impossible to open and a sachet of Jurlique hand cream which is very annoying because once it is open, what do you do with it. I can feel my skin drying out, and my hands already look wrinkled like dried onion skins so I open the sachet and of course the cream runs all over the place. I prefer a tube that can be sealed.

Meals: By the time the staff serve the first meal it is after 2 pm and I am so hungry I have already raided one of the packets of Macadamia nuts which are very moorish. I experienced a sudden unexpected surge of fondness for Australia as I looked at the image of the koala on the packet of macadamia nuts. Why? Surely I couldn’t already be missing my murderous cat Colin that prefers slashing my wrists to having a cuddle. 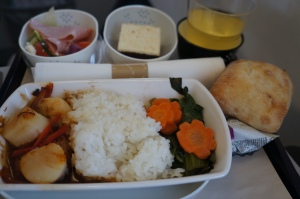 Encased in a sardine tin with very little to do, meals do become something of an entertainment so I peruse the menu with interest noting the option for vegetarian from the three main courses offered.  The meals are adequate; you won’t starve and it is nicer to eat off a plate than from a cellophane plastic bag. I choose the scallops and they were flavoursome and the small salad served as the entrée was fresh. Interestingly no salt or pepper was included in the meal. Usually they come wrapped with the cutlery. The choice of wine is limited. One red and one white (an Eagle Vale Chardonnay) which I didn’t particularly enjoy and when I asked for an alternative there was none on offer.

After the meal people settle in; they keep to themselves, some working, a few reading or doing a puzzle but most are already watching the screen with earphones on and very few talk with their neighbour. Although there were an enormous number of movies on offer, many of which were science fiction I didn’t find any enticing so I read. As I said, air travel can be quite lonely.